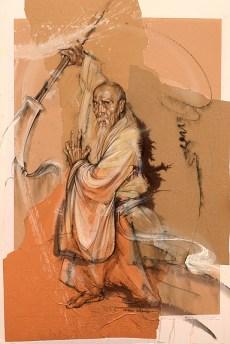 The blow landed solidly into his solar plexus, blasting the wind from his lungs. Luckily he had managed to block the other jab aimed at his throat with a nimble slap. Varuna avoided doubling over from the force of the blow with a deft backwards roll. The gray-skinned pugilist bounced up into a low stance some distance away and shook his head stubbornly.

Gasping for breath, he had realized after their last exchange of blows that he was technically outmatched by the human monk.

This thought flew out of the fighter’s head a moment later. He blinked his crimson pupils and forced his fear away with a stubborn resolve to best his opponent at any cost.

By slowing his breathing and focusing his attention on his opponent, he took in the situation. Jyunin stood about 40 feet away, feet planted shoulder-width apart, fists clenched in front of him in a defensive posture.

In the time it took him to exhale, he had seen the flaw in the other’s stance: its immobility.

With a thought the air around the warrior heated and stirred, wreathing his forearms in magical flame. A moment before his legs exploded with motion, Varuna had decided he would gamble the duel on a finishing charge. He could not last much longer at his adversary’s deliberate pace anyway.

Lowering his torso, his powerful legs hurtled the martial artist towards his opponent.  The muscles of his already exhausted frame screamed with tension.

Closing the distance with blazing speed, Varuna leapt into a whirling dive. His right leg swung out and low in a sweeping kick.

Jyunin could hardly register the flow of the djinn’s movements as the dashing form came at him with reckless abandon.  His opponent was a blur of motion; this fact accentuated by the flames streaking from his arms.

He rocked back onto his left foot to prepare a counter, but his foe was there before his stance could shift.  As the warrior’s leg struck his ankle, he felt a pang of panic. The lightning-swift blow had come from an acrobatic twist of the waist at the last moment before impact.

The human monk gasped from the pain as he jolted forward, his feet thrown out behind him. His elbows instinctively shielding his head from its imminent impact with the cracked earth.

Varuna’s long, unkempt mane of ebony hair flared out around him.

He allowed his momentum to carry him all the way forward.  He slid prone beneath his falling opponent, raining in swift jabs with his tightened fists.  The bald man’s visage froze in disbelief as he watched the punches scorch his tunic with ethereal fire.

Varuna had wrenched his core during the maneuver, bringing his feet in close to his chest. He had anticipated the moment, and now exploded upward with a devastating double kick.

A sharp cry echoed from the human adept as the kick impacted his chin, sending him flying upward.  Jyunin’s eyes rolled back into his head as he crashed into the sandy earth nearby.

Dust covering his robes, Varuna propped himself up on one elbow, “Was that proof enough!?” he called.

The last of his strength expended, he blinked the sand out of his eyes and rested his forehead onto the sand.  His opponent did not respond. Unconscious, onlookers from the nearby shop hovered over him frantically searching his pockets for valuables. . .

The djinn drew stares from many villagers as they milled about the tent.  Jyunin blinked slowly as his vision swam. He regarded his opponent standing nearby, with his now bandaged arms crossed easily over his chest.

“You fought well,” the monk said as he met Varuna’s piercing gaze.

The well-built fighter let a smirk cross his features before speaking, “Yet you did not show me your full strength, and I had to tax my body dangerously to gain the advantage.”

After a pause, Varuna then bowed to the man and added, “I would have you train me, in exchange for besting you . . .”

Jyunin smiled and nodded, “Very well my friend, we shall journey back to Zenka Temple, the home of my order.”

Varuna grasped the man’s forearm and helped him up to a sitting position on the cot.  “We can reach it by nightfall if we depart now.”

Using the djinn as walking support when necessary, Jyunin and Varuna headed north. Their slow pace left the hills of the desert village of Nahr behind. As he followed next to his guide, his mind drifted away from his aching form to his travels during the past year. . .

He left his homeland and the tutelage of his master to seek knowledge of the wider realms. To challenge in combat and learn from any practitioner of martial prowess he came across. . .But most importantly, to learn of his Djinn heritage and abilities.

He had not known his father, and had separated from his mother years ago in the slums of the great city Shal-Tan.

Master Gandaren had raised him and been his mentor. Taking him off the dangerous streets of the Shal-Tan Undercity had saved his life. His teacher had been a famous warrior in his day, his reputation widely known through the Yun Desert. Once a peerless monk, he had retired to a life of poverty and contemplation. When he came across a 12-year-old Varuna begging in the gutter, he decided to train the boy as his protégé.

Varuna frowned, recalling all the questions he now had for the old man in his adulthood. Why had he never spoken of his people, or of their otherworldly holds?

Only days before, his interest was piqued by rumors heard from a wily desert elf. She spoke of royal Djinn bestowing magical sight to mortals who could best them in feats of might or wit.

They were the Agni Ocularis, peerless eyes of “combat-insight” that allowed the user to predict his opponent’s movements, even thoughts. . .

“We are here,” his companion’s voice pulled him from the depths of reverie.

The voice drifted through the howling wind.  His guide walked up beside him along the base of great steps hewn in stone. Clapping a hand on his broad shoulders, he rested briefly. Varuna unfastened his water skin and handed it to his companion.

The temple loomed large in the mountainside.

“An impressive edifice!” the djinn’s voice echoed against the rock.

He stepped as quickly as his aching body would carry him up the limestone staircase. Rhythmic chants sounded in the distance above them.

They stopped at the top of the staircase, peering back at the sun receding against the desolate hills. Varuna felt the ancient weight of the place.

Taken in by the awe of the sight, he silently resolved himself. He would train here until he could enter the Elemental Planes and earn the Agni Ocularis.

Then he would find the Djinn who sired him.

← Waving How to Write Automatically →