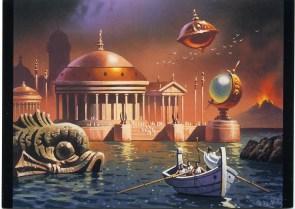 Ever stepping into a cocoon, the transformation awaits the one who knocks on the door betwixt two pillars.

Become the solvent of the cosmos, re-making the putty as it melts. The primary notion of creative experience was the feeling of losing the Self to the unmaking din. A cacophony of consonant concourse sounded the boiling alchemical alembic.

One form dissolves into the next. Change has been the only constant. Therefore, the caterpillar does not recognize the next being in the chain of becoming.

Undifferentiated spark of life, re-coalesce the complex matrices that compose an organism.

A retooling, a reinvention.

Fall back into the dark chaos from whence all things came. Enter into the void of the mother and be born again. Diogenes. The Twice-Born. A second birthing and the creation of a new form of consciousness. Each layer grew and slithered into higher coherence, sloughing off the skin of detritus and decay. Shedding old paradigms. . .

Flipping the wheel around it,

Perched atop the flux, dancing,