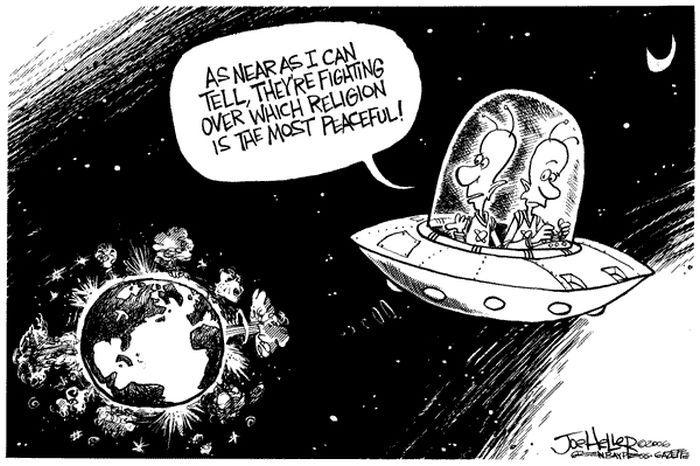 I am continuing a series of posts on some of the major biological, sociological, and psychological impediments stunting our evolution as human family. Besides the obvious Gender, Race, and Class, I contend that Religion has got to be next on our list.

I couch my observations in the impressions left upon me by my upbringing as a Roman Catholic in Texas. I had a long road in my spiritual path traversing the various dogmas and philosophy of Catholicism and finally emerging out on the other side. I will be commenting on the Western lineage of organized religions, as my explorations into Eastern religion is not yet as mature.

I can honestly say now that I am far more philosopher than theologian. If I had a religion, it’s got to be love.

When thinking about patriarchy and “God the Father”, I often see these church fathers as the first social engineers. These progenitors came up with all these ideas about a paternal and stern Father-god. Psychologically, once can see how they projected their own super egos as spiritual kings. Granted, they only made a god in their own patriarchal society’s image to reinforce their values. It is interesting that prodigious metaphor is one of parent to child.

Religions don’t want you to grow up; you are harder to control. They also usually want you to have lots of children for some reason, and include them in all of your the rituals. That way churches get a new “Vacation Bible School” class that summer. By making children unwaveringly believe in something, dogmatic leaders can make these impressionable kids keep their parents in check as well.

[As in Orwell’s masterpiece 1984: a rift at home, a family compromised by the state, is that children make the best secret police.]

Fundamentalist (especially Christian) institutions also make parents believe that by not indoctrinating their kids, that they will burn in hell or suffer in sin. In the Puritanical pulpits of early America, it was said that even unbaptized infants will line the halls of hell…

You just have to ask yourself, “what the fuck is going on here?”

I would argue everyone feels some uneasiness about this, including the clergy delivering the message. Ideas like this, though far from the norm, represent the inherent extremity that can infect rigid dogmas. So departed from anything resembling human values, these tenets clearly reflect pathology.

Adults keep the tradition going often out of fear, remembered from being children themselves. Once the cycle initiated itself in this way, it propagated to establish a negative information feedback loop of religiosity and dogma.

A friend of mine once described the first men to hear about the phenom of Jesus as the some of the first great information salesman. These writers, politicians, and church officials went on to create one of the greatest schemes ever conceived. It did not even matter the specifics of their intentions at the time, their intention was on some level to harness the work of this Great Teacher.

The West is haunted by the institutions spawned from the historical personage of the Christ. The Vatican (the world’s oldest and most powerful corporation?) led this charge in an official religion sanctioned by Rome. As other sects branched off and improved some teachings, so still more merely changed the flavor of the poison of the mind.

This spirit of intention has continued until our modern age and been propagated into new forms. Leaders picked up the torch and carried it forward for good or ill in the church’s early years. Many progressive and generally humanitarian men and women have been littered along the way. However it has always remained about power. The law giving tradition in the Western, Abrahamic religions require obedience to an almighty word.

The men serving  groups may not be evil or domineering as individuals, but the system they desperately and unquestionably serve is clearly corrupted past the ideal it began as. It does not matter if a paragon of virtue attempts to operate within a new religion; their efforts will likely go in vain. The last two popes of the Catholic church I believe to be honest men. Alongside their good works and initiatives though, look at all of the darkness outed among their followers.

The fact that in the 239 years of US history the government, church, and state have only gained more and more power and control over its citizens (all other things being equal granted) is quite alarming. And that no end to their intermingling seems to be in sight is even more suspect. This is part of the reason such restlessness is felt in the early 21st century regarding God and his various flavors.

I am willing to believe in the good will of many of these men and women and their original intentions. Yet because they designed and maintained the religions in this way, it has grown into an oppressive and flawed system that has exacerbated existing class and gender inequalities.

Again we return to the tendency of the top human alphas of the primate troupe leveraging inequality.

The problem with many of these religions, and the ideals they are based in, is that they dwell in the extremes of life. Despite all of their moralizing and law-making, they fail to see the one law of the universe.

This principle inherent in Nature, when considered, rights all the wrongs and approaches humanity’s various images of eternal bliss: Nirvana, Kaivalya, Heaven on Earth, the Golden Mean, etc.

The law of BALANCE.

The only applicable way of living a “religion” is probably something like Taoism if you want to just pick one. This is because this philosophical and religious tradition can be applied to all other things. There are not value judgments.

As organisms, and often as humans with complex inner lives, mechanisms of homeostasis are built into all of our systems. Evolution still created a mechanism of rapid response to threats, both physical and mental, in which we dwell in the extremes to protect and guide our survival.

A critically thinking, empathic, and reflective human may actually approach balance. A dogmatized human will struggle to emerge from the corners he’s hemmed himself within.