The Stone of Evolution 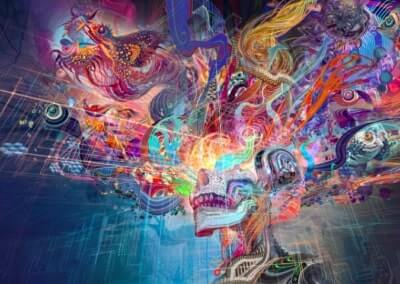 A seemingly magical process of transformation, creation, or combination. (The Oxford Dictionary)

Alchemy truly represents Nature’s cycle in a manner most appealing to the aesthetics of consciousness.

Evolution was ever the master of this art.

She takes the generations, melts their constituents through a furnace of fang and claw and then produces those precious genetic transmutations. The going is slow when trying to smelt gold, however. So often the resultant product seems so similar to the components sacrificed.

Every aeon or so there is a great stone produced by her chemistry, subtle at first in its manifestations. Perhaps the most worthy product of the title, ‘The Philosopher’s Stone’, was consciousness itself.

That awareness which first bequeathed the gift of viewing her immortal science by its own creation.

Man was the magical Espiritu Vitae of Earth’s evolutionary process.

The final step in that perception was realizing that, in his current bonds amidst darkness of reason, and body of clay, Man was but a simulacrum.

A homunculus peering out from a dim cavern.

His true form was more magnificent yet. Humanity had not prepared the proper materials in physicality or mentality for the next unfoldment.

← What to do about Planetary Overpopulation? An Essay on Personal Alchemy →